Albums by Susan Ashton in our playlist: 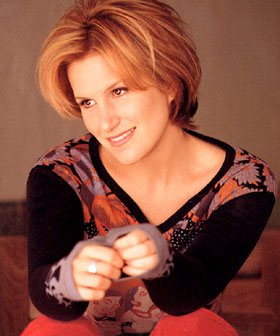 Renewed joy in a long journey

Susan Ashton climbs to the top of a large, freshly rolled hay bale and  gets comfortable. Just over her shoulder she can hear her horses, Serena and Lucy, nuzzle up to the bermuda and settle in for supper. It’s so quiet in this secluded pasture Susan can almost hear the setting sun as it inches its way toward tomorrow.The sun, the horses, the pasture, the quiet…all of it is a reminder of God’s mercy, and it’s Susan’s opportunity to slow life down long enough for her heart to thank Him – to worship Him; to calmly resolve once again that God is always faithful, always has been faithful, and has a place for her in His plan.
To appreciate the quiet moment in the pasture you have to understand the chaotic journey that precedes it. Susan was a 19 year old with the voice of an angel and absolutely no performance experience, which was fine. She was much more interested in large animal veterinary medicine with an eye toward becoming a topflight equestrian competitor. But direction from God and an invitation to sing background vocals on Wayne Watson’s No. 1 song “Watercolour Ponies” changed the trajectory of her life. That appearance led to a recording contract and a move from her hometown of Houston to Nashville to begin what soon became chart-topping success.

“I was pretty naive,” Susan says as she reflects on those early days that now seem a lifetime ago. “I didn’t understand very much and learned how to perform in front of my audience. It wasn’t very good, but fortunately they were gracious to me and I grew up a lot.”

The rise up the charts through the 1990s was a double-edge sword. Although she had a platform for sharing her faith, the time on the road also sapped her soul. Her relationship with Christ became…dry. The decade ended with a broken marriage, financial disaster, abandonment by friends and a deep hurt that’s taken years to heal.

Losing her recording contract with Capitol Records shortly after the new millennium began dropped her to the emotional bottom.

“I didn’t believe at that point there could ever be anything good for me in life,” she said. “I just kept putting one foot in front of the other and God began to heal me. Losing my deal with Capitol turned out to be a good thing for me. I knew I needed to step back and allow God to heal me.”

What she thought would be a year of restoration turned out to be a seven-year reclamation project. Along the way she’s worked as a nanny and shoveled horse poop, lots of horse poop.

“There was a period where i was spending a lot of time repairing a [pasture] fence, cleaning a stable and talking to God,” she said. “He didn’t tell me exactly where I was heading but I clearly had a real sense He wasn’t finished with me.”

She’s far from finished. In fact, one could argue that Susan’s new project is just a beginning. God faithfully brought Susan through every circumstance and restored her love for Him for the purpose of delivering an authentic message that cuts through banal superficiality, and all the way to the soul. Every song is personal and bears the marks of a life still standing after weathering the storms. The voice is crystal clear, the music is artistic, the lyrics are thoughtful and challenge listeners to think seriously about the serious things in life. The best way to describe the compilation is, “musical philosophy.”

It’s been a long, hard journey from the top of the CCM charts to the top of that hay ring, but when Susan looks across the field and to the setting sun she sees God’s merciful hand on her life and feels serenity in her soul.