Albums by Matt Redman in our playlist:

We Shall Not Be Shaken
Matt Redman
Songs: 11

Blessed Be Your Name the Songs of Matt Redman, Vol. 1
Matt Redman
Songs: 12 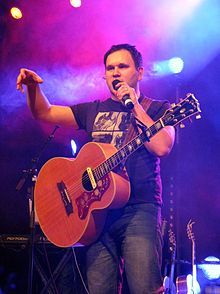 Matt Redman (born 14 February 1974) is an English Christian worship leader, songwriter and author based in Brighton. He has worked with Newfrontiers, Passion Conferences, Hillsong London, Soul Survivor, is an artist for Sixstepsrecords and is a member of Compassionart a charity founded by Martin Smith.

He appeared with Hillsong London for a song on their 2005 album Jesus Is; he co-wrote and sang the song "Greatest Gift". Many Contemporary Christian music (CCM) artists such as Matt Maher, Michael W. Smith, Rebecca St. James, Chris Tomlin, David Crowder Band, Tree63, and Hillsong United have covered a number of Redman's songs. Some of his most popular early songs include "Heart Of Worship", "Let Everything That Has Breath", "Once Again", "Undignified", and "Better Is One Day". More recently he has co-written songs like You Never Let Go, the 2005 Dove Award-winning "Blessed Be Your Name" (Worship Song of the Year) and the Grammy Award nominated "Our God". He regularly works alongside other Christian artists such as Chris Tomlin and Tim Hughes.

In 2002, after a sabbatical in America recording Where Angels Fear To Tread, Redman moved to Brighton to work with Terry Virgo at the Newfrontiers church, CCK. He has been involved in their 'Newday' and 'Together on a Mission' conferences.

In 2004 Redman joined a new church plant, The Point, also in West Sussex, led by Will Kemp.

In 2008 Matt and Beth Redman, along with their three children, moved to Atlanta, Georgia, to plant a church with Louie Giglio and Chris Tomlin called Passion City Church. In August 2010 Redman and his family returned to the UK. They have since joined a church plant in Brighton at St Peter's Church, Brighton.

On 18 and 19 February 2011, Redman joined Chris Tomlin, Louie Giglio, and Nathan and Christy Nockels at LIFT - A Worship Leader Collective. His new live album, 10,000 Reasons, was recorded during this event.

He has authored and edited multiple books on Christian worship, including The Unquenchable Worshipper and the book Facedown which accompanied the album of the same name. His latest book Mirror Ball relays his thoughts and experiences of 'living boldly and shining brightly for the glory of God'.