Albums by Maranatha Singers in our playlist:

Praise 15: He Has Made Me Glad
Maranatha Singers
Songs: 10

Praise 5: It's Time to Praise the Lord
Maranatha Singers
Songs: 10 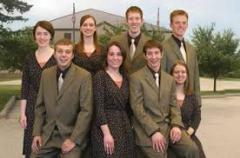 The Maranatha! Singers are the in-house choir of praise & worship label Maranatha! Music. Founded in 1971, the label would release dozens of self-produced albums over the next five decades with a variety of Maranatha ensembles, including the Singers. The choir's releases have included live collaborations with artists such as Terry Clark and Morris Chapman, and the long-running Praise series, which debuted with 1974's Praise 1: The Praise Album and concluded with Praise 20: Who Is Like the Lord in 1999. Maranatha's other releases have comprised children's records, several Christmas releases, and worship recordings including but not limited to acoustic, instrumental, and a cappella offerings