Albums by Kathryn Scott in our playlist: 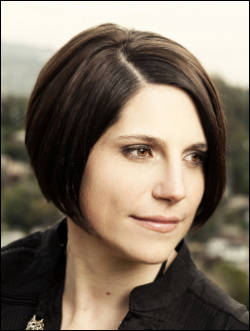 Kathryn Sarah Scott (born 29 September 1974) is a Christian songwriter and worship leader from Northern Ireland. She has written songs such as "Hungry", "At the Foot of the Cross", and "Search Me" for the worshipping church. She released her first album, Satisfy, in 2004, and followed it up with I Belong in 2007 and We Still Believe in 2010.

Scott was born in Eastbourne, England and was brought up in Northern Ireland in a Christian environment. She discovered her talents for not only piano playing but also for singing at an early age. After getting married in 1996, Scott met and began to be mentored by Brian Doerksen, then a mentor of worship leaders from Vineyard Churches UK & Ireland, and as a result, Kathryn's songs feature on many of the Vineyard Records UK albums, including Hungry, Surrender and Come, Now is the Time.

Kathryn was one of the leading contributors to Hungry, one of the most influential albums in international contemporary worship music. Released in 1999 by Vineyard Records UK, it contains 2 of her self-penned songs (including the title track) and another with her writing credits. Kathryn, one of five worship leaders on the album, sings on 7 of the 14 songs, 2 of the 7 alongside another of the worship leaders on the album.

Her first solo album Satisfy, contains 12 songs; 7 of which Kathryn penned. It was recorded in 2003 and released on May 21, 2004 by Vertical Records.

Kathryn and her husband Alan serve as pastors of Causeway Coast Vineyard, a church that they planted in 1999 in Northern Ireland, and have two daughters called Sophie and Emily.

Her most recent EP "Sing on the Battlefield" will be released in the spring of 2014.