Albums by Eoghan Heaslip in our playlist: 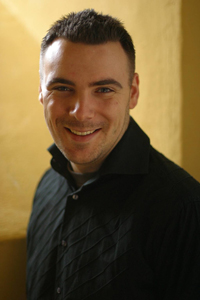 Eoghan Heaslip was born in Dublin; his parents were church leaders so they moved around a lot as a family. However he spent most of his life growing up in Dublin. While he was studying music in Dublin, Eoghan became a Christian whilst being connected with CORE church in central Dublin and attended one of their first Alpha courses when he was 18.

Quite soon after finishing the Alpha course Eoghan was mentored by one of the Pastors at the church who played guitar and led worship. Eoghan started to learn the guitar and this was the beginning of his journey.

Just over three years ago Eoghan moved to Ealing, London with his wife Becky and their two daughters to join the team at St Paul's church where they oversee Worship and Prayer. Eoghan is also the Worship Coordinator for New Wine UK, in networking and training worship leaders around the country, with a particular focus on their worship resources. Eoghan led worship at the New Wine 2008 and 2009 conference and is the core worship leader for New Wine leadership and regional conferences.

Eoghan is currently studying theology at a college called SPTC where he is one of the students training to be ordained in the Church of England.'

Eoghan displays his heart for resourcing churches in worship through a collection of songs on his album titled Wonderful Story. Released on Survivor Records in November 2008, the album was produced by Nathan Nockles, (Tim Hughes, Matt Redman, Passion albums).

Eoghan's first album with Survivor includes co-writes with Tim Hughes, Brenton Brown and Nick Herbert. "My hope for any of the records I've done over the years has always been to offer songs 'from the church for the church'. All of these songs are songs that have come from the worshipping life of regular churches here in the UK, and have been written with the church in mind, and with the church at heart," says Eoghan. "All of the friends I have worked with in writing for this project are Worship Leaders that have the very same motivations as I do, which has really made preparing a much easier process."

Eoghan featured on New Wine's debut studio album Saving Grace, released by Survivor in August 2009. Saving Grace not only manages to connect with the roots of live worship that run so deep within New Wine, but also serves up a truly personal worship encounter for any listener. That single purpose remains at the very core of New Wine, as well as Saving Grace itself; to flood the church with all that it needs to sing a better, bolder song. As Eoghan Heaslip puts it, the local church is at the heart of the action:

"Our hope and prayer for these twelve exciting new songs is that they enable and equip Worship in the local church. All of these songs have been written by local church Worship leaders and for ministry and use in the local church, reflect our values in Worship that is passionate, intimate and that facilitates an encounter with God."