Albums by Don Moen in our playlist:

Mighty Cross (A Celebration of the Tree of Life)
Don Moen
Songs: 8

God with Us A Worship Experience for all Seasons
Don Moen
Songs: 17

Give Thanks
Don Moen
Songs: 15 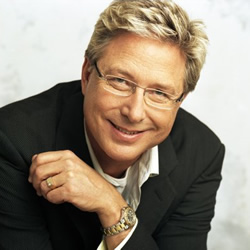 Before Moen was hired to work for Integrity Music, he attended Oral Roberts University and became a Living Sound musician for Terry Law Ministries and traveled with Terry Law for ten years. He produced 11 volumes for the Hosanna! Music series of worship albums. His first album under his own name, Worship with Don Moen, was released in 1992. His music has total global sales of over five million units.

Moen worked for Integrity Media for over 20 years, serving as creative director and president of Integrity Music, president of Integrity Label Group, and an executive producer of Integrity Music albums. He left Integrity Media in December 2007 to start a new initiative, The Don Moen Company. The Don Moen Company acquired MediaComplete, the church software company that created MediaShout. Moen became a radio host for Don Moen & Friends in 2009. Moen received a Dove Award for his work on the musical God with Us in addition to amassing nine nominations for his songs.

Moen's first album for Hosanna! Music, Give Thanks, became the label's bestseller. He followed this with a number of successful albums of his own including two, En Tu Presencia and Trono De Gracia, in Spanish. God with Us won the Dove Award for Best Musical. On an Asian tour in 1999 he recorded The Mercy Seat at Singapore Indoor Stadium in Singapore and Heal Our Land at Yoido Park in South Korea, which was released in 2000. One of Moen's albums, I Will Sing, was recorded at Christian Broadcasting Network.

God Will Make a Way: The Best of Don Moen was released in 2003 and features 19 greatest hits. The title song was written for his sister-in-law and her husband, whose oldest son died in an auto accident while three other children were seriously injured. Moen's Hiding Place became his first studio album which was recorded at Paragon Studios in Franklin, Tennessee and was released in the autumn of 2006. I Believe There Is More released on fall 2008. His third studio recording titled Uncharted Territory (funded successfully through Kickstarter) released on March 27, 2012. His new Christmas album, Christmas: A Season of Hope, will release in October 22, 2012 and some songs were recorded at a studio in Czech Republic. Moen has released a new album titled Hymnbook as a celebration of reaching over 1 million likes on his Facebook page.

Thank God your mind has been restored