Albums by Charlie LeBlanc in our playlist:

To Him Who Sits On The Throne
Charlie LeBlanc
Songs: 13

Lord of All
Charlie LeBlanc
Songs: 15 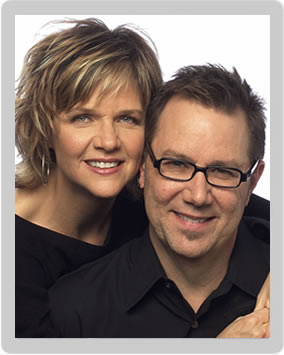 Serving the Lord together in music ministry for over 30 years, Charlie & Jill LeBlanc are all about encouraging people through their music and helping Christians step up to become the vessels God wants them to be. Their songs, their writings and their talks are all Bible based, endeavoring to reveal God as being bigger than life’s difficulties.

For years Charlie & Jill have faithfully served the Body of Christ in various aspects of ministry: teaching through their songs, leading Praise and Worship, teaching in Bible schools, seminars, clinics and conferences, as well as mentoring and training other worship leaders and music teams. They have also served as Conference Worship Leaders for Joyce Meyer Ministries and Andrew Wommack Ministries for several years.

With more than 100 songs recorded on over 20 CDs distributed world wide, they are seasoned singer/songwriters with many new songs under construction, as well as branching into book & blog writing. Their travels have taken them to over 25 nations in almost every continent.

With the loss of their son in 2009, they have watched God birth another whole avenue of ministry to the bereaved and down trodden, restoring hope and healing to wounded hearts, as the Lord continues healing their own.

One of Charlie and Jill’s signature scriptures representing the heart of their ministry is found in Colossians 3:16 —

Let the word of Christ dwell in you richly, as you teach and admonish one another
in psalms, hymns and spiritual songs, singing with grace in your hearts to the Lord.

was born in New Orleans, Louisiana on December 4, 1954 into a good Cajun family, the fifth of six children. He grew up in Baton Rouge until his father's job was transferred to Columbia, Missouri in 1967. One year later they made the move to St. Louis, Missouri where he has lived most of his adult life.

Raised in a strong Catholic family, his commitment to Mass and all church functions were abundant, even serving as an Altar Boy during his younger years. However during his teen years as he watched his "model family" begin to slowly fall apart, exacerbated by a debilitating accident which left his mother paralyzed from the waist down, Charlie began to wonder about the real existence of God and the reason he was alive. One day he asked the ultimate question: "God, if You're really real, prove Yourself to me." The Lord was just waiting for an invitation, and promptly began working in Charlie's heart. Just before his 20th birthday in December 1974, Charlie gave his entire life to Jesus, and was born again into a genuine relationship with the "real" and Living God. This began a cascade of events, which eventually drew all of his family members to become true Christians as well.

was born in Lebanon, Missouri on October 28, 1957. The youngest of three children, she was raised in a Christian home attending the local Disciples of Christ Church. Jill's father took employment in St. Louis in 1967 and moved the family from the small town of 8,200 to the large metropolis of over a million people.

During the Jesus Movement of the 1970s, Jill attended her first Charismatic prayer meeting on November 7, 1971. This was a life-changing event for her. Although raised in church and a true Believer at heart, she began to experience a brand new vibrant relationship with Jesus like she never had before. She was then baptized in the Holy Spirit January 9, 1972, which was the beginning of a whole new life for her. Jill is the first to admit, however, she wasn't "the perfect Christian" by any means and did a lot of stupid things. But by God's infinite grace and kindness, although only 14 years old, she never strayed and lived in close fellowship with the Lord through the rest of her teen years to this day.

New Covenant Fellowship was the largest Charismatic church in the St. Louis area during the '70s. Both Charlie and Jill began to attend there near the same time – during the Fall of 1974. They eventually met and became friends, both being musicians, and had many common friends who were also involved in music. Charlie had come out of a heavy English-rocker background (Cream, Eric Clapton, etc), and Jill's musical influences at the time were the likes of Cat Stevens and James Taylor, yet the Lord was able to take these opposite musical backgrounds and eventually work them together for His purposes!

Charlie & Jill became very close friends, along with one other friend from church, Larry Mintz, who was also instrumental in getting Charlie saved. They were a three-some who always hung out together, and eventually all played together in the worship band at church. From the time Charlie & Jill met, Jill always felt something very special in her heart for him (possibly even that he was "the one" :), although she tried to keep it hidden away to preserve their friendship. All along though, Charlie liked Jill as a close friend but didn't consider anything more. Larry, Charlie & Jill continued to hang out often, but eventually it became obvious the Lord was stirring something in their hearts. For two years they dated on and off, but in September of 1977 Charlie proposed and they were married March 11, 1978 in St. Louis.

Soon, the call to attend Bible College in Tulsa rang loudly in their hearts. So in August of '79 they loaded up their belongings, moved to Tulsa, Oklahoma and attended one year of Bible College. During the school year, Charlie & Jill led the praise & worship every Sunday at a local church located at the Osborn Foundation, founded by Evangelist T.L. Osborn. This was their first "solo" assignment leading worship. Up until this time, they either assisted or co-led with other worship leaders in St. Louis at Grace Christian Center with their mentor, Pastor Ron Tucker.

Shortly after her birth, they again packed up everything and moved to Phoenix, Arizona to pursue Charlie's first staff position at Faith Chapel Foursquare Church in Glendale. It was a small operation, and Charlie filled every position from Worship Leader, Project Director (which included jump-starting random idle projects around the building), Youth Leader, and everything in between. Not long after, they learned again they would be blessed with another child. And in November 1981, their darling daughter Cherrie was born.

In June of 1981, Charlie left the staff position at Faith Chapel, and together with Jill they started Joyful Word Ministries, to fulfill their calling of bringing God's Word in song to the world. This included not only traveling to churches around the nation, but they also hosted a weekly "Praise & Teaching" meeting in Phoenix, where dozens would come to worship and be nourished in God's Word.

In 1983 the LeBlancs received an offer from Pastor Rick Shelton at Life Christian Center in St. Louis to once again come on staff to lead the worship, direct the worship team, and serve as one of the pastors on staff. So they loaded up once more and moved back to Missouri, which is where their precious son Beau Charles was born in May of 1985.

They were a very close family growing up, as they all traveled together (most of the time) while Mom & Dad ministered across the nation and around the world.

Fast forward several years, many miles and lots of birthdays to January 2009. The LeBlanc's lives were changed forever that year as their beautiful Beau left this life and took up residency in Heaven, following a bravely-fought battle with cancer. You can read more about their journey by clicking this link.

Through this painful, unimaginable loss, Charlie & Jill have watched God birth yet another whole avenue of ministry to the bereaved and hurting, restoring hope and bringing affirmation to wounded hearts.