Albums by Caedmons Call in our playlist:

In the Company of Angels: A Call to Worship
Caedmons Call
Songs: 12

In the Company of Angels II: The World Will Sing
Caedmons Call
Songs: 11 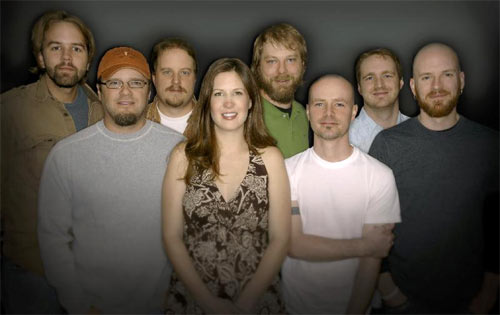 Caedmon's Call is a Contemporary Christian band which fuses traditional folk with world music and alternative rock. Caedmon's Call was formed in 1993 with six original members (three of whom still remain), Cliff Young (whose father and brother are highly successful pastors), Danielle Glenn, Todd Bragg, Cari Harris, Joshua Phillips, Doug Elmore, and Aaron Tate. Tate, however, never intended to tour with the band, and was included in a songwriting capacity only. Derek Webb also joined the band early on, though it is notable that he did not even meet all the band members until after they had played their first show together. In June, 1994, the band released their first album, My Calm // Your Storm, originally a cassette-only demo recording. It was re-printed twice the same year with different cover art each time. In 1996 the band signed with now-defunct Christian label Warner Alliance, producing their self-titled major label debut. Around this time, Randy Holsapple joined the band. During this time, Kirby Trapolino served as Manager, Micah Ottosen served as Road Manager, and Buddy Ottosen served as Guitar Tech.

After the collapse of Warner Alliance in 1998, Caedmon's Call signed to Essential Records, where they remained until May 2006.

In the summer of 1999, both Aric and Randy left the band, while Josh and Jeff became official members. In 2003, after the successful release of Back Home, Derek left the band to pursue a solo career. In the spring of 2004, Andrew Osenga, former lead singer of The Normals joined the band.

Aaron Tate and Derek Webb shared most of the songwriting duties until the album Back Home, which featured songs by a more diverse set of writers. Randall Goodgame has, in the proceeding years, become one of the band's primary songwriters.

In 2004, Caedmon's released Share the Well, a missions album that was critically acclaimed but unable to find a radio audience. The album, which includes songs written by Randall Goodgame, Andrew Osenga (guitar) & Josh Moore (keyboard), was inspired by the band's trip to India, Brazil and Ecuador. In addition to broader Christian themes, Share the Well tackles a variety of social-justice issues, such as hunger and the Dalit's battle for freedom in India.